The Giant Schnauzer is categorized into the family groups: Livestock Dog, Schnauzer, and the Working group. This breed originally came from Germany, out of the lands of Wurrtemburg and Bavaria.

Cattlemen were quite fond of the smaller standard-sized Schnauzer and thus wanted to breed a larger-sized version of the dog for specific jobs. They needed a bigger dog to drive cattle, and so the Schnauzer was mixed with larger, smooth-coated cattle driving dogs. The attempt was made to create a wire-haired drover.

Although the exact breed crosses are not documented and cannot be accounted for first-hand, theorists have come to the conclusion that other dogs were added to the mix. These dogs are said to have been the black Poodle, Wolf Spitz, Wirehaired Pinscher, the Bouvier des Flandres, and even the Great Dane.

The end result was a dog referred to as the Munchener. It was smart, capable of handling cattle, and sported a weather-resistant coat. In time, the breed became more and more popular and were used as stockyard dogs, guard dogs, butcher dogs, and brewery dogs.

Eventually, the name was changed to the Giant Schnauzer, and the breed was used as police dogs around the time of World War I. They excelled rapidly as a service dogs but remained unpopular around the world except for Germany.

As the name implies, the Giant Schnauzer is just that, a giant. Therefore, it may be a bit too rambunctious and rough for small children. But their playful character and protective loyalty to its family also make this breed an excellent house dog. They may be a bit reserved with strangers and aggressive towards other dogs, but this is what makes them a top-rated watchdog with the ability to defend their family through force if needed.

Taking Care Of Your Giant Schnauzer

Giant Schnauzer dogs can live outdoors during cold temperatures but prefer to sleep inside with its family. Grooming requirements are 2 – 3 thorough brushings each week to keep its wiry coat clean. Professional shaping, clipping, and scissoring are also recommended.

The average lifespan for a healthy Giant Schnauzer is between 10 and 13 years. A very healthy dog breed, it has only 1 major health concern; CHD.  Minor health issues include OCD, hypothyroidism, and gastric torsion.

Dogs are not normally aggressive, they are usually taught to be by their owner’s lack of education in training dogs or by being abused. Aggression in dogs is shown in several ways: Barking Growling Staring Mounting Biting, in extreme cases There is always a cause for a dog’s aggression, and hopefully there is a cure…

Sporting dogs make likable, well-rounded pets. Members of the Sporting Group include pointers, retrievers, setters, and spaniels. Known for their instincts in water and woods, many breeds still actively participate in hunting and other field activities. Owners of Sporting Group dogs need to realize that most require regular, vigorous exercise, something you should consider before…

The Standard Schnauzer is one of the most dependable watch dogs a family could own. Extremely bold and very intelligent, this breed also makes the perfect pet for any dog owner that has a firm grip on training and lives an active lifestyle. The Standard Schnauzer tends to be on the dominant side and quite…

This past winter I attended a number of Sportsman Shows throughout the northeast where I performed numerous waterdog retrieving demonstrations, showing the versatility of the English springer spaniel and Labrador Retriever. What amazed me while speaking to the average outdoorsmen was that they were unaware of a spaniel or the Labrador Retrievers’ versatility, but rather…

In today’s world, people feel a need for security for themselves and their families. Some people want to keep their property or business secure from intruders. Although alarm systems can do the job, many people choose to get a dog instead. In certain breeds, this guarding and protecting is an instinct, and dogs have been…

John Muir was born in Scotland in 1838 and immigrated to the United States with his family in 1849. He became a well-known environmentalist and helped established several US national parks. He made four trips to Alaska, and this short story is from one of those trips. 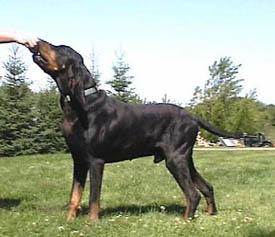